Missed It By A Mile

We are living in a time when only extremes get attention. Look at the ubiquitous use of the word “extreme” in sports, styles and beliefs. Extremist proposals get more media attention in politics, culture and unfortunately, even in the church. If a political candidate, public figure or preacher is perceived as moderate he or she had better do something quickly to appeal to the extremists in his or her camp. I would ask, “Are you following after the path that Jesus walked or are you seeking to draw attention to your own cause?” Jesus never sought public attention, accolades or self-glories. When God took the occasion to praise His son, Jesus was careful to point back to His father.  Our true recognition comes from Jesus Christ, not the recognition of men. More on this later, so read on.

Enter the Kim Davis fiasco. Mrs. Davis is a Democrat and Apostolic Pentecostal elected last fall. Davis gained heroine status among many Christian fundamentalists when she refused to issue licenses to couples seeking a same-sex marriage. She defied a federal court order, lost a string of appeals, and then sat in a jail cell as hundreds of protesters, politicians, preachers and news crews descended on this small, rural town unaccustomed to media spectacles. Remember, we are living in a time that only extremes get attention.

Davis said she did not want to be in the spotlight. Unless you have been living in cave for the past few years, how could you not believe that such an event would not propel you into the public eye? Look, I really do not want to be overweight, but if I eat junk food three times a day it will net a specific outcome; that being, excessive weight gain. All of our actions have predictable results, and consequences.

I far as I am concerned, Kim Davis is a hypocrite. And those who came to stand in the limelight of this controversy are even worse. Sometimes I wonder if people ever read the Scriptures or do they simply follow along like cattle listening only to the utterances of herdsmen standing in pulpits.

Without any doubt the Scriptures clearly tell us in Matthew 19:4-6 that God made them male and female, for this cause the man will leave his parents and cleave (cling faithfully) to his wife. Of this, I have no doubt. So why would I consider Mrs. Davis as being hypocritical?

In her zeal to uphold this truth she reveals the errant teaching found in so many churches. Remember, we are living in times that only extremes get attention. In fundamentalist groups the hot buttons are same-sex marriages, the Second Amendment, illegal immigration and the upcoming election. Those are the extremes that get coverage, even inside the church.

Through errant teaching, a failure to study the Scriptures or simply a matter of personal choice Kim Davis, and a host of others, said to the world, “Our faith is like a cafeteria. We just pick and choose what is expedient to further our cause.” Of course, in doing so, it does not further the cause of Christ.

The Scriptures also say:
(2 Corinthians 6:14)  Be ye not unequally yoked together with unbelievers: for what fellowship hath righteousness with unrighteousness? and what communion hath light with darkness?

(2 Corinthians 6:15)  And what concord hath Christ with Belial? or what part hath he that believeth with an infidel?

Certainly Mrs. Davis has previously issued marriage licenses to atheists. And certainly not everyone who received a license from her was an Apostolic Pentecostal. And what about those who were fornicators and adulterers that received a license from her? So it is OK to yoke nonbelievers together, to have an association with darkness and to have part with an infidel? Any true believer should see the error here. Remember, we are living in times that only extremes get attention.

Do you remember my earlier statement? Our true recognition comes from Jesus Christ, not the recognition of men. Lo and behold I saw a post from an Independent Fundamental Baptist preacher standing aside Kim Davis with his arm around her shoulders in a show of support. He is the greater hypocrite! I have seen this preacher stand in the pulpit and listened to him rail on Apostolic Pentecostalism. Baptist beliefs are not even in the same universe as Pentecostalism. By the proclamation of his beliefs as an Independent Fundamental Baptist he is turning a deaf ear to the instructions given in 2 Corinthians 6:14,15.

Mrs. Davis attends the Solid Rock Apostolic Church in Morehead. I have to wonder if that Baptist preacher even took a minute to look at the church’s website. Had he done so he would have seen this statement, “Our church is very welcoming from the healing of the sick in Jesus’ Name and casting out devils in Jesus’ Name. Why? Because they believe the “Father,” “Son” and “Holy Spirit” are not three distinct persons, but only three different titles for one person: Jesus. That is why Apostolic Pentecostals baptize believers in the name of Jesus. Baptists and most other Christians baptize newly converted believers in the name of the Father, Son and Holy Spirit. Apostolic Pentecostals deny the doctrine of the Trinity and that goes to the very heart of the Bible and the Christian Gospel — the very idea of the Godhead.

But there he was, the big Baptist preacher hugging Kim Davis in support of her adherence to one portion of Scripture and a total disregard for another. Remember, we are living in times that only extremes get attention. And it is attention she got and he wanted. Both missed it by a mile!

The City of the Living God

Preacher to the PNP & AFP 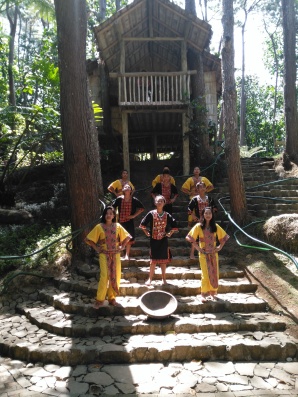 New Bibles Given to Government 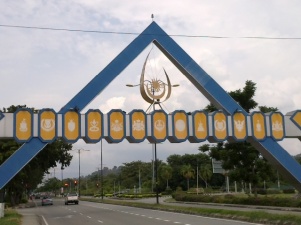 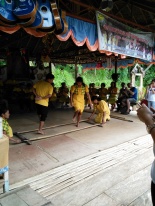 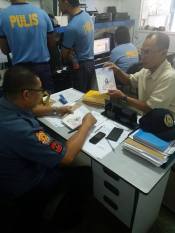 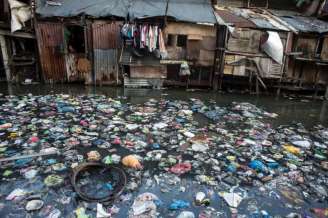 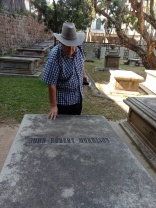 Grave of John Morrison in Macau 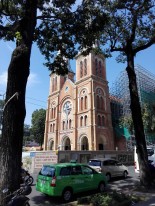 Ruins of St Paul in Macau

Morrison Chapel in Macau
Follow Pressing the Issue on WordPress.com

The Scriptures are the blueprints for living a life pleasing to God, not man-made rules, regulations or traditions, which usurp the authority and intent of the Scriptures. If your group of believers chooses to build, buy or rent a physical structure in which to meet and worship, then please do so, but do not condemn others who may choose differently.

Thanks for vistin’! Y’all come back.